Christmas in Lisbon: a fascinating city

This post is also available in: Português (Portuguese (Portugal))

The city of Lisbon in December, takes new colors and looks to tourists and its inhabitants with a different look than the one which it has during the hot summer season. Festive and dazzling decorations and fairy lights adorn the historic center of the city. The temperate climate and festive atmosphere that reigns in the streets make the city a perfect place to spend a few days of your holiday season and year-end.

In the Portuguese capital, the Christmas holidays are different from those of any other city. Lisbon is a city of nostalgia and melancholy, its historic center with its cobbled streets smell of roasted chestnuts.

One of the most popular Portuguese Christmas traditions are the concerts with choirs and orchestras that usually take place in churches and theaters. During the holiday season the churches of Lisbon are full of music. Concerts and masses that are held in churches are a good opportunity to listen to Portuguese traditional Christmas songs and to experience the genuine atmosphere of Christmas in Portugal. 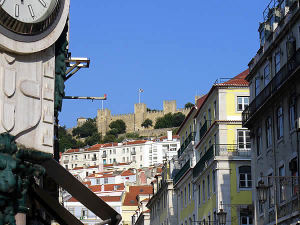 The charm of Lisbon is also due to the wide variety of atmospheres and environments that are reflected in the various districts of the city. In the district of Belem, one of the most prestigious districts of the city, the decorations of Christmas have as background the prestigious monuments of the golden age of Portugal, when the country was one of the most important global trading powers, its vessels commanded the routes to the east and the Portuguese language was the language of commercial use along the coasts of Africa and Asia. In the district of Belém are the magnificent Jeronimos Monastery and the famous Torre de Belém, masterpieces of Manueline arts and symbols of Lisbon.

In shopping districts such as the Baixa, Chiado and Bairro Alto, the city is sparkling with lights and decorations adorning the streets and the doors of the houses and shops. Between the most picturesque districts of the city are the neighborhoods of Chiado – with its antiquarian bookshops and historic cafes – and the Bairro Alto, with its artists and the places frequented by young people. In the narrow streets of the popular neighborhood of Alfama – that climb steep towards the castle – resound notes of Fado, the Portuguese typical melancholy music.

For gourmands, Christmas offers some delicious Portuguese pastries. The most famous is the Christmas cake “bolo-rei” a sweet round stuffed with raisins, nuts and candied fruit, its name refers to the Three Kings. The “rabanadas” is a cake made with French bread slices and made wet with milk, wine or sugar syrup, served sprinkled with cinnamon sugar or sugar syrup, maple syrup or honey. Other typical dessert, not just for Christmas, it’s the “sonhos” or “bola de berlim” a fried donut, sprinkled with sugar and filled with custard.

In the Baixa, in the center of the Praça do Comércio, one of the largest squares in the city, stands a giant Christmas tree, nearly 30 meters high. In this square on December 31 of each year thousands of people gather in the streets to celebrate the New Year with friends. The Praça do Comércio in the night of December 31 become the meeting point for the inhabitants of Lisbon and foreign tourists to celebrate the arrival of the new year.

If you are in Lisbon with children you should definitely visit the Aldeia Natal in the Parque Eduardo VII, a Christmas village specially designed for children. Here you will find a magical forest inhabited by reindeer, elves and magical creatures, there will also be Santa Claus here called “Pai Natal”. In the Aldeia Natal there are also many activities to do: visit the home of Santa Claus, walk in the enchanted forest, visit the Roman camp, the crib or the town of Nazareth, observe the Three Wise Men with their camels, paint your face, listen to fairy tales, admire the giant snowball, ride the rides, watch the snow guns, etc.